Ganesh Chaturthi is celebrated on the fourth day of the bright moon phase Bhadrapad (August/September); it is the birth day of Sri Ganesh, a big festival celebrated worldwide. There is a wide variety of customs and ways of celebrating it, but as on any other festival, people worship the deity to whom that particular day is dedicated with prayers, meditations, pujas, a special prashad, flowers and satsang.

Sri Ganesha’s elephant head symbolizes wisdom, and his trunk symbolizes OM. There are more versions and illustrations of what Ganesha holds in his hands. He holds in his hands mostly a stick (ankush – a stick used by the elephant riders) used for pushing humankind forward on their way towards the eternal. Ankush also represents a tool used for keeping our minds under control. The axe in his hand cuts all obstacles in our way, and with the loop of rope Ganesha gently catches those who start to go astray and keeps them on the right path. Moreover, even though Lord Ganes is famous for being the remover of obstacles, he also creates them on the path of a bhakta who goes astray from the path that leads him towards the goal. His broken tusk held like a pencil in his hand is a symbol of a sacrifice offered for writing Vedas and Mahabharata. When his pencil used for writing down the words of Maharishi Ved Vyasa broke, Ganesha did not want to interrupt the rishi in his reciting of mantras, so he broke off a piece of his tusk and continued writing. Mala (the rosary) suggests that the search for knowledge and self-realization should be constant and ceaseless, and sweets (ladhu) point to the universal goal which is to discover the sweetness of the Atma. His vehicle is a mouse that represents the conquering of ego so that the wisdom (Ganesha) can move forward. Besides that, the mouse represents a hardly noticeable degradation (a tiny invisible biting) which Ganesha also has under his control. 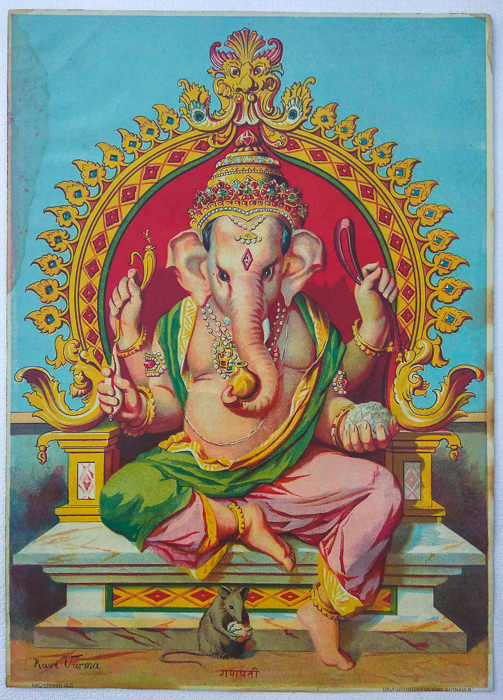 There is a great number of stories about Sri Ganesh, and almost all of them hiding a deeper symbolic meaning and a teaching about life, spirituality and dharma, so they should be read with attention.

Once Ganesha, on his birthday Ganesh Chaturthi, after receiving a huge amount of sweets – prashad – from his devotees (God cannot refuse what is offered to him with love from a bhakta), mounted on the mouse and started to ride him in order to relieve himself from the heaviness in his stomach and digest the sweets. It was a beautiful full moon night. Suddenly, from nowhere, a snake came out and frightened the mouse who jumped and spilled Ganesha. Ganesha’s belly was full of sweets so he hit the ground in such a way that he burst and the sweets went all over the place. Ganesha was not mad with the snake but he took it and placed around his waist as a belt to keep his belly closed. He again mounted his mouse and continued. Chandradev, the Moon, saw the entire thing and roared indecently with laughter. Ganesha became angry at such behaviour, so he halved the moon and uttered a cursed upon him so that everybody who looks at the moon that day would have bad luck. Chandradev begged Ganesh to be merciful, but since a curse can never be completely reversed, Ganesha minimized it by making the moon wax and wane every 15 days and by showing itself full only for a short period of time. This explains the moon phases, and the custom not to look at the moon on that day remains today.

The point to the story and the avoidanceof looking at the moon is that from this day on we should decide to keep away from the company of those who by lacking faith laugh at God or our master (kusang – bad company) the same way the Moon laughed at Ganesh.

We grind cashew nuts (preferably in a coffee grinder until they become like dough). Cook the syrup from the sugar and water (a few minutes to melt well). We do not fry the sugar before adding water because the brfi must remain almost white. Add ground cashews to the syrup and stir until the mixture is absorbed and thickens well. Roll out the mixture to a thickness of about half a centimeter (it is best to use a transparent foil as a base and over the dough so that it does not stick to the base and roller. Instead of foil, we can oil the roller and the base). If we have, edible silver foil sheets are placed on top of the dough. This foil, in addition to decorations, is extremely effective as a protection against spoilage of all sweets. Cut rhombuses out of the dough and cool slightly. Cashew nuts are the finest and most prized, but they can also be made from a mixture of cashews and peeled almonds or just almonds.