The celebration of the festival of Holi is very old in its origin and is described already in the ancient writings sutras. In its essence, that festival is the celebration of the final victory of good over evil. Literally, Holi means burning out, and, like all the other spiritual festivals, it has many legends connected to it, all of them having one thing in common – in the end the evil is defeated, and burned, and the victory of good is celebrated. Apart from the story about Prahlad, there is a story of an evil witch Putana who wanted to poison the baby Krishna by offering him her poisonous milk, but instead of succeeding, she was burned at bonfires. There is also the victory of Lord Shiva over Kamdev, who was burned by the Lord Shiva’s third eye when he tried to trick him on the day of Holi. The following legend narrates how the grandchildren of one grandmother had to be sacrificed to a female demon, Holika. The sadhus told the grandmother that Holika can be defeated by laughing at her. So she gathered some children who surrounded Holika and started to laugh at her. The deamon fell dead on the ground and the children made a bonfire and burned her…and many others of her kind.

The story about Prahlad:

Hiryankaship was a very famous demon and a king. Lord Vishnu killed his younger brother, who was a demon as well, so Hiryankaship wanted to take revenge on him by becoming the king of all three worlds (of the sky, earth and the underground) To attain his goal, he performed different sacrifices for many years and finally gained some power. By thinking he has the power to defeat even Gods, he became so overtaken by his ego that he commanded that nobody in his kingdom was allowed to pray to God, not even to mention His name, but to worship him only.
Yet, Hiranyakaship had a son named Prahlad who was a true devotee of Lord Vishnu since his early age and did not obey the rules given by his father. He constantly repeated the mantra “Jay Sri Hari”. When after many attempts at making his son change his mind, the king realized he would not succeed and decided to kill Prahlad. He ordered, one after the other, a number of the most brutal executions of Prahlad, but thanks to Vishnu’s mercy the latter would escape them unhurt each time.
The king had a sister, Holika, who had a siddhi (power) of not being able to be hurt by fire. So one day, after many attempts at killing Prahlad had failed, the king ordered Prahlad to sit in Holika’s lap and to sit together on a burning bed. But to his surprise, Holika was burned, and Prahlad came out of the fire unhurt. Therefore, Holi celebrates the victory of Prahlad, the symbol of good, over Holika, the symbol of evil. It conveys to us the message that God always takes care of and protects his devotees. Despite all the hardships that Bhaktas encounter, He is the one who always saves them.
The story ends with the complete victory of good over evil. After Holika’s death, the king ordered Prahlad to embrace an incandescent steel column which he prepared for him previously. While approaching the column, Prahlad thought of seeing thousands ants walking up and down the column and thought that if they can walk on that column, then he can embrace it as well. Full of bhakti and trust in his Lord, he went to embrace the column. At that moment the column split and out of it came Narsingh, the incarnation of Vishnu (half human, half lion) who caught and killed Hiryankaship. A part of the power Hiryankaship got through his sadhana was the blessing that he cannot be killed by either a human or by an animal, during daytime or in the night, in the house, or outside of it. That is why Vishnu incarnated as Narsingh, and caught and killed the king on the doorstep of his palace – which was neither in the house, nor outside of it, and at sunset – which was neither during daytime nor in the night. 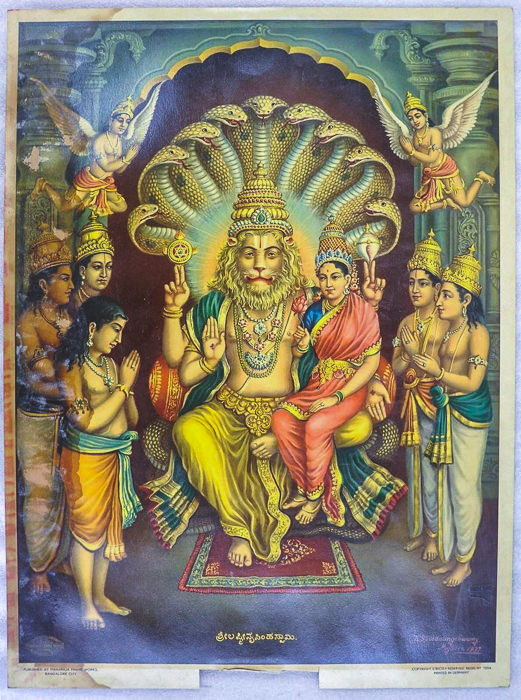 In memory of this story, the night before Holi people all over India light bonfires so the evil can be burnt in them. The custom of coloring each other with paint has its roots in Lord Krishna, who popularized the tradition of Holi. Coloring others with paint is one of his numberless Divine plays and playful childhood tricks with his followers in Vrindavan.

As with all other spiritual festivals, versions of this story can be found almost in all traditions. Around that time people in Croatia celebrate “Fasnik”, which is but one of the numerous names of this festival that is common throughout the region, which in its essence carries the same meaning – people laugh at the symbol of evil, burn it at huge bonfires and rejoice over the victory of good over evil.