Maha Shivaratri means the Great Night of Shiva, a festival dedicated to Lord Shiva and celebrated according to the Lunar Calendar on the 14th day of the waning phase of the moon Falgun (February-March). The ceremony and the celebration takes place on the night between the 14th and the 15th. One belief is that this is the day when Shiva and Parvati got married. Furthermore, it is believed that this is the night when Shiva performed Tandava – the dance of the primordial creation, maintenance and destruction. In Linga Purana it is said that on this day Shiva manifested himself in the form of Lingam.

There are many stories and legends related to Maha Shivaratri, and one of the most popular is the one about Lord Shiva drinking poison in order to save the world, and this is where the blue throat of Lord Shiva comes from – Nil Kant Mahadev, as depicted on many images. Devas and Asuras were churning the ocean to get Amrita – the Nectar of Immortality. They used the Snake Vasuki as the stirring, churning rope. When Amrit was almost at the point of being extracted, the first thing that came out of the mouth of the snake was a deadly poison. Control over the poison was lost, so it threatened to destroy the entire world with its vapors and immerse it into darkness. When they realized what happened, Devas ran for help both to Brahma and Visnu, but nobody could help them. Finally Lord Shiva drank the entire poison in order to save the Universe. The poison remained in his throat. Even though he was strong enough to neutralize it, he had to stay awake the entire night, so in order to keep him awake, Gods kept him company and entertained Him with songs and dance. In memory of this, on that day the devotees of Shiva stay awake all night and close to their Lord. This story has a deeper symbolical meaning. Devas and Asuras represent different people, the good and the bad ones. The Ocean of Milk represents the perfect world full of peace and happiness for all. Amrit represents happiness, and the poison is human selfishness and greed. Shiva symbolizes Atma – the Self. People do many things in order to be happy and often they are overpowered by their own selfishness and greed that destroy all efforts at keeping the peace and happiness. Therefore the only way to attain peace and happiness and overcome greed and selfishness is to meditate on Atma, the Divine Self, in the night, because it is the only time when a man is undisturbed by the material world. 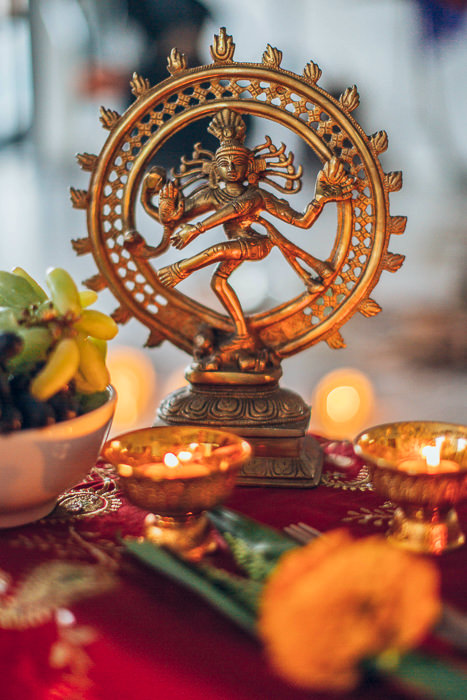 The second story relates to a hunter who shot many birds and got stuck in the woods in the evening. To protect himself from wild animals and survive the night which came upon him while he was hunting, he climbed the tree called Bilva – bael. In order to stay awake, the hunter was picking leaves one by one and throwing them to the ground. It happened so that under that tree, whose leaves were holy, was a Shiva Lingam, so it turned out that the hunter was doing Pooja to Lord Shiva the entire night. Shiva was very pleased by the hunter and saved him despite the hunter’s past of killing so many birds. This story, as all others, has many different versions, but the point is the same – no matter what the sins and the way of life, the one who observes fasts, prayers and pooja in the night of Shivaratri is granted great mercy from Lord Shiva. In memory of this story, the ceremony of Maha Shivaratri includes the offering of bael leaves as well.

There are many different ways to express devotion and love towards God. Pooja is a type of prayer, a ritual which sometimes includes all the three ways, the physical – kaya, through the speech – vatcha, singing mantras and bhajanas, and mental – mansa – japa or meditation. There are many types of pooja, and abisheka belongs to Sodasopachara pooja. Abisheka is a ceremony of bathing a specific deity, especially by pouring libations on it. Unlike abisheka, where water or nectar is used, the element through which a havan is performed is fire, the flame. There are more ways of performing abisheka, from the simple pouring of water to the bathing of what is worshipped in a specially prepared nectar. The nectar is sometimes enriched with sandal paste or powder, as well as rose water or coconut milk, according to the tradition of the particular area.

During abisheka, people sing matras and pray mentally for blessing – in this case the blessing of Lord Shiva. The exact way of performing Maha Shivaratri pooja is described in Shiva Purana. The abisheka of the Shiva Lingam is part of that pooja. Abisheka is performed with a nectar that consists of milk, joghurt, honey and sugar, water and ghee. Milk represents the blessing of purity and holiness, joghurt is for prosperity, honey to speak nice words, sugar for happiness, water for purity and ghee for victory. During abisheka people sing “Om Namah Shivaya” or Maha Mrityujaya Mantra.