The meeting all of our senses, mind, consciousness, Atma and Jiva: that is Kumbha Mela. TheVessel (Kumbh) is our body. There is a constant battle inside of us between the Devas (divine qualities) and asuras (demonic qualities): what will prevail depends on us.

Kumbha Mela is a mass pilgrimage on which millions of people participate. It takes place every 12 years, alternating in four different locations: Prajag (Illahabad), where the rivers Ganga, Yamuna and Saraswati conjoin, Haridwar on the Ganges river, Ujjain on Kshipra river and Nasik on the river Godavari. Ardh Kumbh Mela takes place every six years in Haridwar and Prayag, whereas Poorna (complete) Kumbh Mela is always held in Prayag every 12 years. Maha Kumbh Mela (the Great Kumbh Mela) comes after every 12 Poorna Kumbh Melas (every 144 years) and is held also in Prayag (the last Maha Kumbh Mela was in 2001, it saw the participation of about 60 million people, making it the largest gathering of people in the world).

According to the ancient texts – the Puranas; devas and asuras (gods and demons) were churning the ocean to take out amrit (the nectar of immortality). After nearly destroying the world, they got the bowl of nectar, but then a terrible fight began about who would get the nectar. During that fight, Jayanta, the son of Indra, took kumbha amrita (the word kumbha means the vessel) and from it four drops fell to earth, in Prayag, Ujjain, Nasik and Haridwat. In search for this “nectar of immortality” (self-realisation and liberation), spiritual seekers visit these four places on which, at specific constellations, Melas are held (mela means gathering). 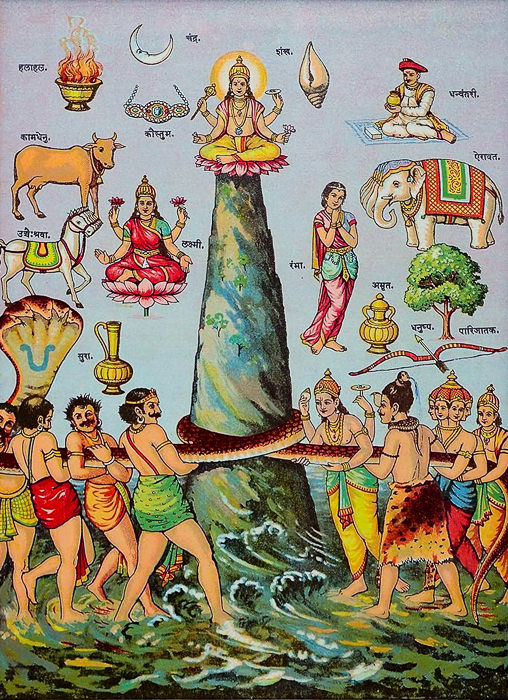 Ritual bathing and gathering of saints

Bathing in holy rivers during the Kumbha Mela is considered a very important part of the spiritual life of every person, because it brings the purity of body and soul, and leads to liberation. All sins are surrendered to Mother Ganga, who will purify them, and as a gift she is offered good deeds and prayers.

Kumbh Melas are occasions where saints and enlightened masters have gathered for thousands of years. It is a unique opportunity to see in one place and at the same time many Mahatmas, Paramhansas, enlightened teachers, sadhus etc. It is said that every grain of sand on the Kumbha Mela carries immense blessings, because it was touched by the feet of the saints, and that the air that is being inhaled also carries blessings, because the wind brought it from the body of a saint. These are places where legends and stories do not feel distant and unattainable anymore, but become a part of everyday life, and traditions and religion merge into one, becoming that from which they emerged – Sat Sanatan Dharma.

For spiritual seekers, Kumbha Mela is the moment when the spiritual life gets another dimension – that of happiness and fulfilment, thus giving an incentive to continue their journey towards the goal which is Atma Gyana.

According to Hindu mythology, Haridwar is one of the seven holiest places, because it is believed that the gods in Haridwar left traces of their feet. Called also by the names of Mayapur, Gangadwar and Mokshadwar in ancient writings, Haridwar remains the most important place of pilgrimage for Hindus.
Haridwar lies at the foot of the Himalayan area Shivalik, and a legend says that Lord Shiva sent the Ganges to quench the thirst of people by spinning Her out of his bundled hair (bun). This is how she descended to the fields of Haridwar. From here Ganga continues towards east and south through Illahabad (Prayag), Varanasi, Patna and Calcutta all the way to the Ganga Sagar, where it merges with the ocean.
Throughout the entire year devotees and believers from around the world come to Haridwar for pilgrimage, performing pujas, prayers and ritual bathing. However what Haridwar is most known for are the Kumbh and Ardh Kumbh Mela, which are held every 12 years of the solar cycle. At that point in time millions of devotees and visitors dive into the most sacred river in India to achieve liberation. One of the most beautiful scenes during Kumbh Mela in Haridwar is the singing of Aarti (prayer) at Har ki Pauri ghat (ghats are the entrances/walkways/steps to the Ganges) with hundreds of participants and oil lamps floating down the Ganges. 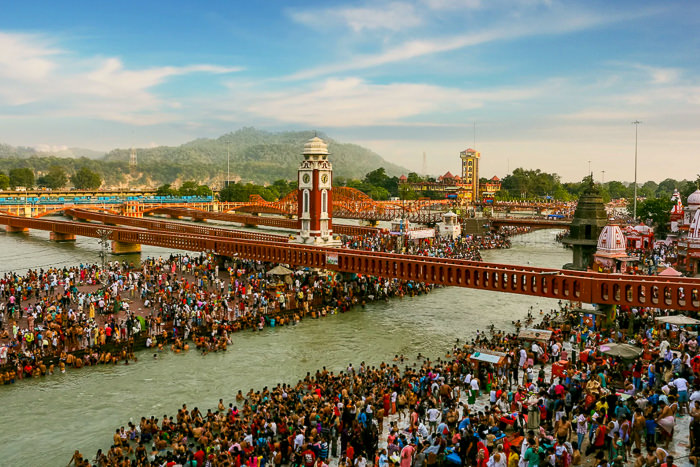 The original name of this town is Prayag, and even today it is called this by most of the Hindus. Prayag means a sacred place of connection of two or more rivers, an estuary. In Illahabad, all three sacred rivers of India merge together – Ganges, Yamuna and Saraswati and this is considered to be the most sacred of all estuaries in India. Prayag is the second oldest city in India, and is also called Thirti Raj (the king of all places of pilgrimage).
The place where all three rivers meet is called Sangham (the unification) and it is the central point of pilgrimage. During Kumbha Mela, millions of people gather at the Sangham, which becomes a small city within a city. It is believed that the Ashram of a great saint – Bharadvaya, which hosted Lord Rama, Sita and Lakshmana during their exile, was located at Sangham. 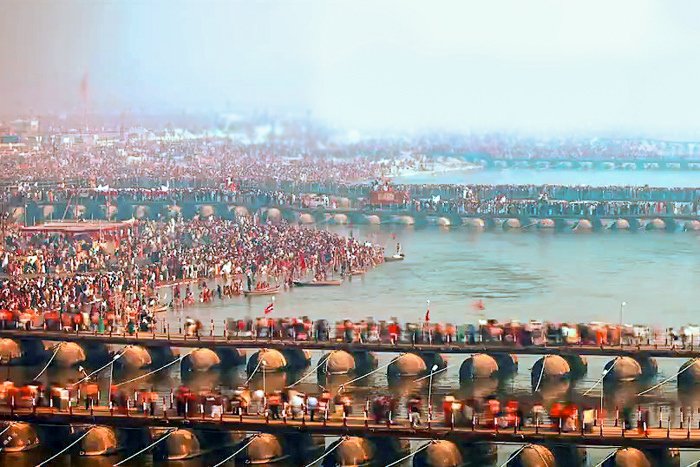 Adi Shankar and his four disciples

Adi Shankar had four main disciples called Padampad, Hastamalak, Sureshwar and Trotak. He founded 4 peeths (a peeth literally means chair, here it has the meaning of lineage): Jyotir Math (math is a monastic order, a monastery) in the north, Shringeri Math in the south, Govardhan Math at Jagannath Puri in the east and Sarada Math in the west, and each of his four disciples were set as the leader of one of the maths.

The disciples of Hastamalak (Govardhan Math from Jagannath Puri) have “Van” and “Aranya” written after their names. The students of Sureshwar (Jyotir Math, Badri Math) have added to their names “Giri”, “Parvat” and “Sagar”, and disciples of Trotak (Shringeri Math) write “Puri”, “Bharthi” and “Saraswati” behind their names. In this way all sannyasis took one of these surnames, which gave rise to the institution Dasnami (the 10 names) among the sannyasis.

History of the Origin of Akharas

During the invasion of Mahmud Gazuri, Mohammad Ghori and Taimur, thousands of Hindu temples were razed to the ground, and millions of Hindus were killed. Things were no better even when the Muslims ruled India.
Realising the dangers of oppression and persecution of the followers of Sanatan Dharma by the fanatics and aggressors of other religions, Adi Shankara realized that spiritual power alone is not enough. He wanted younger sadhus to gain muscle strength through physical exercises, and to gain proficiency in the use of weapons. The maths where they practised such skills have become known as “akharas” (literally: a wrestling place). 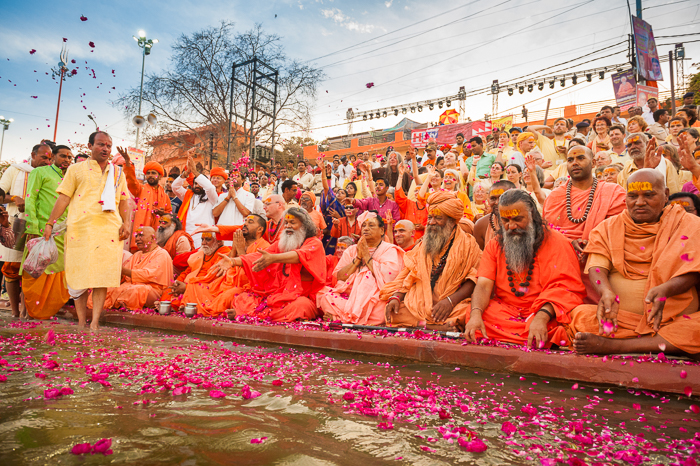 Adi Shankara advised akharas to resist by force, if necessary, the persecution of Hindus and desecration of their sanctuaries. During the Muslim invasion and the Muslim rule, these akharas were the barrier against attacks on Hindu people, their shrines and institutions. Many times armed members of the akharas bravely resisted the persecution of Hindus and desecration of temples. Rulers often sought the help of the Naga soldiers in their wars. They famously fought many battles and a huge power of akharas reached up to 40,000 people. After India’s independence, akharas lost their military character, and their saints strongly dedicated themselves to preaching and propagating the eternal values of the ancient Indian culture and philosophy.

There are 13 akharas in Haridwar and each of them, under the guidance of highly revered saints, has numerous Mahamandaleshwars. Most of them have their own ashrams and disciples even outside Haridwar.

Atal Akhara, the oldest one, was established in 646 in Gondvana. That akhara was revitalized in 1704, and its headquarters is in Patan, though there is an ashram in Kankhal as well. The current head of the akhara is Acharya Sri Mahamandaleshwar Mangalanand Giri.

Maha Nirvani Akhara is an offspring of Atal Akhara. After being denied the Gajanandaji’s Prashad (blessed food), the seven sadhus of Atal Akhara went away and started doing tapasya (austerities) at Gangasagar. They had darshan (divine appearance) of Kapil Muni and with his blessings they found this akhara in the year 748 near Neel Dhara in Haridwar. In 1260, 22,000 naga saints under the leadership of their spirited leader Mahanta Bhavanand Giri, liberated Kankhal of Muslim invaders. The present akhara is at the exact place where they set up their first flag. This akhara owns the Daksheswar temple, and its present head is Acharya Sri Mahamandaleshwar Vishwadevanand.

Avahan Akhara was founded in 646 and reorganised in 1603. The headquarters of this akhara is Dasamegh Ghat in Varanasi (Benares). It also has an ashram in Rishikesh. Famous warriors from this akhara were Swami Anupgiri and Umrao Giri. The present acharya is Sri Swami Mahamandaleshwar Shivendra Puri.

Anand Akhara was founded in Berar (in Madhya Pradesh state) in 855, and its main centre is in Varanasi, though it has ashrams also in Haridwar. Its acharya is Mahamandaleshwar Devanand Saraswati.

Niranjani Akhara was founded in Mandva (Gujarat) in 903. Its main center is Daranganj, Allahabad. They have a beautiful ashram at Dam Kothi in Haridwar. Mansadevi and Vilvakesar temples of Haridwar belong to this akhara. The present acharya is Sri Mahamandaleshwar Punyanand Giri.

Juna Akhara is also called Bhairav Akhara. It was established in 1145 AD in Karan Prayag, Uttarkhand. Its main centre is Mara Hanuman Ghat in Varanasi, and its ashram in Haridwar is near the Mayadevi temple. Its acharya is Sri Mahamandaleshwar Lokeshanand Giri.

Agni Akhara was founded in 1136 AD and its acharya is Sri Mahamandaleshwar Swami Prakashanand Maharaj.

On the occasion of Shahi Snan (royal bath) of Maha Kumbha Mela mahamandaleshwars, mahants, acharyas and the heads of all the 13 akharas participate in the beautifully decorated procession to the place of bathing. 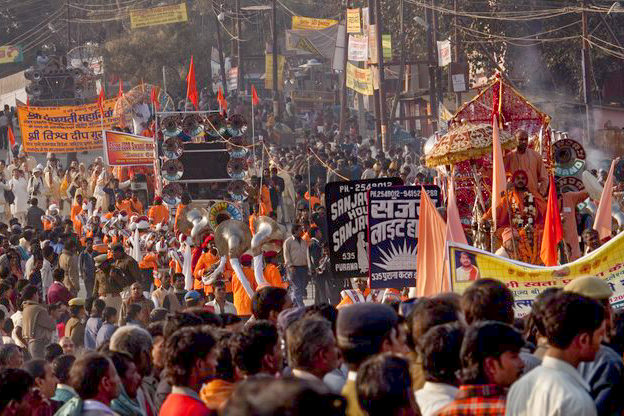 The Initiation into Mahamandaleshwar in Allahabad During the Kumbh Mela 2013

On Wednesday 13th February 2013 in Priyag Raj (Allahabad) in India, where more than 140 million people bathed at the intersection of the three holy rivers – Ganges, Yamuna and Saraswati, two Croats became mahamandaleshwars.

At the Kumbha Mela, through this highest initiation into mahamandaleshwars, the leaders of the Hindu monasteries expressed a great, and for a foreigner, extremely rare honour to these two Croats.