The word Sannyasa in Sanskrit means renunciation. A Sannyasi – a Swami, is one who received Sannyas Diksha and became part of the Holy Order of Sannyasis. Sannyasis carry the title of Swami, or, in the case of women, Swamini or Sadhvi. Swami literally means husband, master, owner. In this case, it means one who has mastered himself. 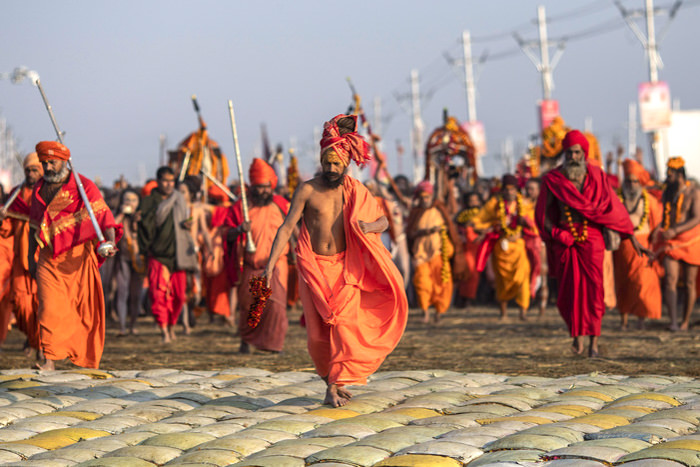 The term renunciation needs to be understood properly. In Sanskrit the word is tyaga, and is translated as abandonment, release, waiver, renunciation, separation, detachment. Through this process one does not feel pain, longing, or lacking of anything. This kind of renunciation brings endless happiness, as when a ripe fruit drops naturally from the tree, and nobody needs to rip it off forcibly.

Tyagi is a person renouncing out of a natural process of growth of consciousness; one who does not see anything appealing any more in the embrace of Maya (unreality, illusion). This means that for him there is no difference between the good times and the enjoyment or suffering and pain, in the sense that for him all this is one an the same Maya, the illusion. But there is more to it. Being a Tyagi also means renouncing everything, not just the current way of life, clothes and environment – but to renounce completely one’s small ‘I’ as well, and to dissolve into the Divine.

Vairagya is derived from two words: vai – which means to dry, to dry up, and raga, which means colour, passion, feelings, interests, attachment. A person is a Vairagyi when all his wordly passion and attachment dries up, melts down.

The closest and most frequently mentioned explanation of a sannyasi is that sannyasi is a Hindu monk, not a priest (pandit). Yet, this explanation is too simplistic and does not correspond to the whole truth, because in reality sannyasi does not belong to any religion, and at the same time he belongs to all of them. It is said that sannyasa begins where formal religion with all its limitations ends. For a sannyasi, all churches, temples, synagogues and mosques, traditions and rituals are equally close to him, and equally far. He is in search of a direct realization of the truth, attainable by following the instructions of his own Guru.

The Tradition of Sannyasa

The tradition of Sat Sanathan Dharma speaks about two types of life paths. The path of a family man – who works on his family Dharma by leading a family life filled with Sat Sanathan Dharma principles and spirituality. He is a pillar of the society he lives in. Likewise, sannyasa also means life in line with the Dharma, but in this case with the Sannyas Dharma. Sannyas Dharma is life led according to the principle of renunciation. Complete renunciation of the ways of life of a family man, and the duties and responsibilities of a family life, including the position in society, ambitions, wealth and family relations. Instead, a sannyasi dedicates all of his time to meditation, his yoga sadhana, life in the ashram, helping others, the search for God and the transmission of the light of spirituality to people leading a family life.

The tradition of sannyasa can be found in all of the world’s traditions and societies. There is no culture that does not have sannyasis – people who have left the worldliness and devoted themselves entirely to a higher spiritual life, and helping others in their spiritual progress. Over time and in different places they got different names – saints, sages, mystics, ascetics, monks, hermits, philosophers…

The Lord Shiva himself is considered as the archetype of a sannyasi. He is known as Tyageshwar – the Lord of Sannyasis and Yogis – of those who renounce.
During his life, Adi Shankaracharya introduced reforms to the sannyasa and formed a system that is still observed in India today. He established ten orders (Desnami – ten names) of sannyasa. Although there are differences regarding rules of sannyasa from one order to the other, the essence and the meaning remained the same.
Dasanami Sampradaya, or Dasanami, literally means – a tradition of ten names. It is a monk tradition – Ekadand, or the tradition of those who have renounced worldly things and now wander the earth, wearing nothing but one staff – the stick of knowledge. This is the tradition of Advaita Vedanta, founded by Adi Shankaracharya. Everyone, regardless of gender, class, caste, age, can receive sannyasa in the ekadand order of the dashanami tradition. 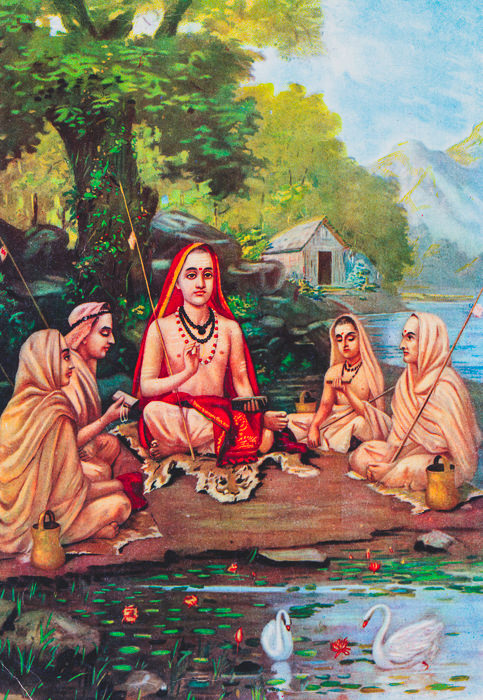 The tradition of Ekadand was established in ancient times, but due to the deterioration caused by Buddhism, which is only a branch of Ekadand, Adi Shankaracharya established four mathas – pillars in the 8th century AD, that are the solid foundation upon which Sat Sanatan Dharma continued to exist to the present day.

One who is initiated in the sannyasa of the Ekadand tradition receives one of the ten names associated with the sampradaya – the tradition of their school.

Saraswati, Puri and Bharati are associated with Sringeri Sarada Peetha, an important Advaita Math located in Sringeri. It is claimed that this is the first of the four mathas founded by Adi Sankaracharya.

Tirtha and Ashrama are associated with Dwaraka Peetha or Dwaraka matha, located in the coastal city Dwaraka in Gujarat. It is a place of pilgrimage dedicated to Lord Krishna. It is also known as the Western Math and Kalika Math.

Almost all spiritual philosophies claim that first you have to die in order to be born again. The same applies to Sannyas Miksa – the initiation into sannyasa – where a devotee, after completing all of his life samskaras, symbolically receives a new life. In Hinduism there are 16 samskaras that every Hindu should observe, the last one being the funeral ceremony.
As usually happens when entering into a new life, during the ceremony of Sannyas Diksha a sannyasi gets a new name and the orange robes worn by all sannyasis. Only the initiated sannyasi can initiate someone into sannyasa, and the ritual, like all the 16 samskaras, is usually led by Pandits.
In the ritual fire, a sannyasi burns all his previous karmas and worldly attachments, becomes free from worldly life, and makes a commitment to live by the principles of Sannyas Dharma. A spiritual teacher, Guru, knows when it’s time for a disciple to become a sannyasi, just like a farmer who knows when is the right time to pluck the fruit from the tree. Only when vairagya has become completely mature in a devotee, and he is no longer attracted by worldliness, he is ready for the Sannyas Diksha. 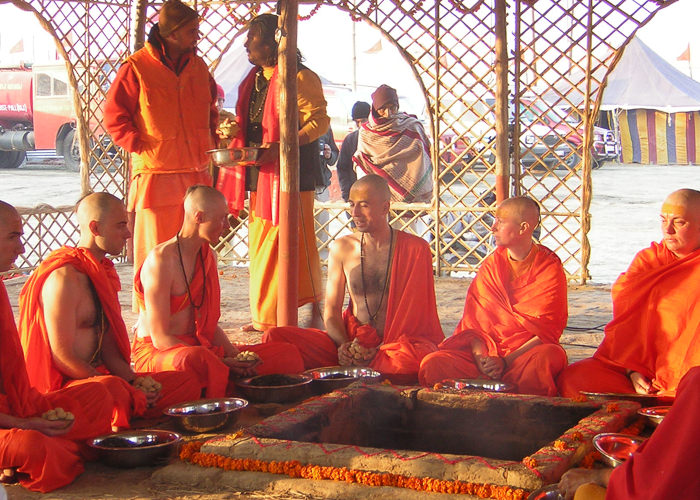 The orange robes that sannyasis wear are the symbol of fire and purification. At the same time, the same fire will burn the sannyasi himself, if he gets off track and does not respect Sannyas Dharma. So the path of sannyasa is the highest and the most beautiful one, but at the same time both very demanding and challenging.

During Sannyas Diksha, the future sannyasi takes vows, among which are the vow to renounce the ego, worldly treasures, and the vow of simplicity. The second is the vow of obedience, where a devotee gives promise to follow the tradition of Sannyas Dharma and Guruvakya – the Word of the Guru, and accepts obedience to his Parampara – the spiritual lineage to which he belongs. The third is the vow of chastity, purity of mind, feelings, actions and words. This part relates to ahimsa – non-hurting, the basic principle of Hinduism.

By receiving a new life from their respective Gurus, swamis and sannyasis do not belong to anybody anymore, because all connections to the worldly life have ceased to exist. Yet, by renouncing the specific connections, he starts to belong to everyone, i.e. to the whole world. Then their task is to spread the Divine word and serve humanity.