The oldest spiritual scriptures of India and of the world are called the VEDAS. Veda literally means “knowledge”, specifically the highest knowledge about God and man. For Hindu people Vedas are the spiritual truth, said to have been a direct revelation from God (DEV VANI– the voice of God) to four ancient Rishis (self-realised saints) during their meditations. This truth was then passed on orally. Hence the Vedas are also called SHRUTI, which means “das Gehörte” – “the things heard”. 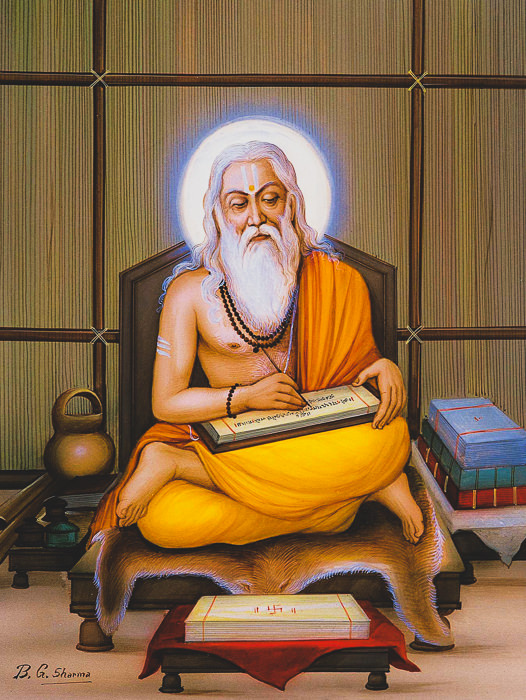 There are four Vedas: Rig, Sama, Yajur and Atharva Veda.

Each Rishi received only one of them, and then passed it on: Agni Rishi – Rig Veda, Vayu Rishi – Sama Veda, Aditi Rishi – Yajur Veda, Angiras Rishi – Atharva Veda.

TheVedas were transmitted orally all the way up to Maharishi Ved Vyasa who then wrote them down. Vedas are as old as the Universe, and are said to have been on Earth for at least 20,000 years. It is believed that the Aryans, who moved to India from their original homeland near the Arctic area, carried most of these earlier scriptures with them. Later they were recorded in Sanskrit – the language created by readjusting and perfecting the original Vedic language of the Aryans.

The word Sanskrit literally means purified or perfected. The written Sanskrit characters that also existed in the Vedic language are called DEVA-NAGARI (“divine inhabitants”), and are considered symbols containing divine energy. The Aryans who came to India referred to themselves as “Aryans”. The expression – “Hindu”, as we call them now, is of more recent origin.

Rig-Veda and Sama-Veda were written in verse, Yajur-Veda in prose, and the Atharva-Veda mainly in prose and partly in verse. The Vedas contain a total of more than 24,000 mantras. Rig-Veda, the oldest and most extensive, contains 10,000 mantras.

The hymns of the Rig and Sama-Veda are dedicated to various deities and gods of nature like gods of earth, fire, rain, etc., and their aim is to forward blessings from gods for peace, happiness and prosperity.

The ceremonies contained in Yajur-Veda served the same purpose. One part of the Vedas also consists of rules for interpreting Vedic ceremonies and philosophical discussions about God, the soul and the afterlife.

Each of the four Vedas consists of four parts, which are called Veda-Samhita. The four parts are:

The Upanishads teach that in the whole Universe there is only one reality, and that is God. Everything that ever existed, exists and will exist in the Universe originates from Him, and disappears back into Him, in the eternal cycle of creation, maintenance and destruction. He is the sun, the moon and the stars, the planets, every living being, all living and non-living matter and every virtue, every vice, all the good and the bad, every thought, every feeling and every act. He is time and space and all that exists in the Universe. He is eternal within the Universe and simultaneously He transcends it. He is unformed, eternal, boundless and omnipotent. He is manifest and unmanifest. He is manifest in His creation and is unmanifest when all that is created disappears in Him. The highest and purest principle of God is His unmanifest existence, when the whole Universe disappears in Him, when the sun, the moon, the stars, the planets, all animate and inanimate ceases to exist, and time and space disappear. This unmanifest essence is the only existing reality.

The Upanishads contain one of the highest ideas about God and His relationship with human beings and the Universe. Rightly they are given the highest place among the great religious philosophies of the world.

The great philosopher Schopenhauer said: “In the whole world, there is no study so beneficial and so elevating as that of the Upanishads. They were my comfort in life and will be my consolation in death.”

There are 108 most widely known Upanishads (eg. Brihadaranyaka Upanishad, Chandogya Upanishad, Taittiriya Upanishad, Kena Upanishad, Iso Upanishad, Mundaka Upanishad, Svetasvatara Upanishads, Mandukya Upanishad). Each of these major Upanishads is connected to one of the four Veda Samhitas. The idea of​ the one, unformed and infinite God, as the true reality of the Universe, inseparable, and at the same time beyond everything, is based on the philosophical discussions from the Upanishads. The teachings about the immortal soul, the law of karma, the consequences of actions and the law of evolution of living beings through the process of rebirth according to their own karma or actions, are based on the Upanishads.

Based on the subject, the Vedas can be divided into two parts:

Each of the Vedas is characterised by some MAHA-VAKYA (maha= great, vakya= word). MAHA-VAKYA is there to convey knowledge about the union of JIVA (the Individual Self) and BRAHMAN (the Highest Self):

Vedangas – Six Limbs of the Vedas

Subsequently added to the Vedas are six VEDANGAS – “The limbs of the Vedas” (auxillary texts, interpretations):

Kalpa, as one of the six disciplines or ancillary Vedic sciences, is written (as all of the Vedangas) in the form of sutras. A Sutra is both the presentation style, and the text as a whole. Literally it means a thread or yarn. In this case it refers to a short rule or saying. When these two meanings are combined together, “Sutra” means the threading and weaving of short rules. Kalpasutras are rules about ceremonies.

There are three types of kalpasutras:

Srauta sutras: Describe the solemn ceremonies and the fire sacrifices performed by the priests with their assistants, and are adapted either from the Srutis or the Vedas.

Dharmasutras: Contain rules and commandments for the social, political, public and religious life. The word Dharma literally means “something that unites”. It also has other meanings, and one is faith. From these texts Indian law and ethics were subsequently developed (Dharmasastra).

As the number of inhabitants and the associated complexity of social, economic and political problems rose, the practice of the oral transmission of ceremonies disappeared. Gradually Srauta Sutras and Grihya Sutras went into oblivion. Dharmasutras that contain social, economic, political and religious rules have been retained and continue to be utilised.

Public and private customs, and the way they were practised, were subject to many changes that ultimately resulted in new records being written on these issues. They were written in verse and called Dharmashastras. Some of them are only the rearranged Dharmasutras, reflecting the requirements of that period in time and the increase in population.

The Vedas are also the treasure of the oldest Aryan culture. They give an overview of its social system and the way of life, its customs, art and science.

They originate from activities relating to the observation of the stars and the movement of the planets, and are contained in the Vedas due to their importance in determining the exact time for the performance of ceremonies.

Its primary purpose was to describe shapes and give a more detailed measurement of lines and characters that had to be respected on the sacrificial altar.

It results from the need of determining the rules of pronunciation of the recitations, ceremonial hymns and mantras.

The word Purana literally means “old, ancient”. They are instructive stories, tales about gods and heroes whose aim is to teach people aboutmoral life. They also are attributed to Maharishi Vedvyasa. There are many Puranas, the most important are the Mahapuranas. The most famous Mahapurana is the Bhagavata which speaks about 10 incarnations (avatars) of Lord Vishnu, especially that of Lord Krishna. Together with the Ramayana and the Mahabharata (the two most important epics in Hinduism), the Puranas constitute what is sometimes regarded as the fifth Veda.

Smriti means remembrance. It is knowledge that has been transmitted through the ages (traditions) and then later recorded by rishis and brahmins according to the memory of the teachings they heard from their masters (as distinct from Srutis – knowledge directly revealed from God through Dev Vani). The term Smriti also refers to religious scriptures and books of law containing this transmitted knowledge.

Smriti, like all other scriptures of Hindu philosophy, acknowledge the authority of the Vedas and the Upanishads, and relate to the teaching about God and the creation of the Universe. They treat the practical use of these highly philosophical ideas in daily life – in its social, political, economic and religious aspects. They include the rituals described in the Vedas, adjusted to changes in social context. These scriptures mirror the daily life of a post-Vedic Hindus from birth to death. They describe the social circumstances in which they lived and the close connection between daily life and faith. They connect daily religious rituals with daily duties and activities from the moment of awakening to bedtime.

There are 80 Smritis, of which Manusmrti or Manavadharmasastra (Code of Manu) is considered to be the oldest and most important. Despite some small differences, the essence of all the Smritis is the same and can be briefly characterised as follows:

SMRITIS are divided into two groups:

The longing to know God is rooted deeply in the human soul. From the need to satisfy this deep request for spiritual knowledge, many religions and teachings have developed since the beginning of mankind. They are handed down for generations in the form of certain rules of life, which, together with the religious rites and prayers, are intended to lead us to the realisation of God.

By recognising weak points in the existing religious books, records, thoughts and dogmas created by people, the Bhagavad Gita based its religious postulates not only on divine origin, but also on logic, reason, ethics, moral and philosophical teachings about life and work.

The Bhagavad Gita clarifies to us that there are no shortcuts or favouritism on the path towards God-realisation, and that the highest goal can only be achieved by proper and relentless striving. I.e. By developing and acting according to the reason and power of discrimination (Viveka), and through unwavering faith and devotion.

Each teaching and prayer must be first understood through our mind and wisdom, and then taken into our heart and utilised on our spiritual path.

All Hindu philosophical schools or systems respect the authority of the Vedas or the Vedic teaching, recognising the immortality of the soul, the laws of karma and the process of rebirth and evolution through many lives until the final self-realisation. Some of them believe in the limitless potential of the human soul and the ability to achieve supernatural powers such as clairvoyance, etc. However, the use of such powers is not to be seen with favour unless it serves for the overall happiness of mankind.

According to the classical teaching there are 14 Vidyas(scriptures):