The Vedas are the oldest spiritual records in the world. The literal meaning of the word Veda is knowledge – the highest knowledge of God and man. The Vedas are the spiritual truth that the rishis received in meditation directly from God through Dev Vani – the voice of God and passed them on from the Master to the disciples by word of mouth. Hence the Vedas are also called Sruti which means – that which is famous. There are 4 Vedas: Rig, Sama, Jajur and Atarva Veda, and the rishis who received and continued to transmit them were:

The Vedas were transmitted orally all the way to Maharishi Ved Vyasa who wrote them down. The age of the Vedas is from the very beginning of the universe, and they are said to be at least 20,000 years old on Earth. The Rig-Veda and Sama-Veda are written in verse, the Jajur-Veda in prose, and the Atharva-Veda mostly in prose and partly in verse. The Vedas contain a total of more than 24,000 mantras. The oldest and most extensive is the Rig-Veda with 10,000 mantras. The hymns Rig, Jađur and Sama Veda are directed to various deities and gods of nature, earth, fire, rain and the like, for blessings that ensure peace, happiness and prosperity. One part of the Vedas are also the rules for interpreting Vedic ceremonies and philosophical discussions about God, the soul, and life after death. Each of the four Vedas contains four parts called the Veda Samhita. Each Veda is marked by Mahavakja (maha – great, vakya – word) which conveys the essence of knowledge about the union of Jiva – the Self and Brahman – the Absolute, the highest Self.

Om let us meditate on the blessed Divine Light, worthy of admiration, which is fixed in our hearts.
May It enlighten all our possibilities, may it guide our intellect, and may it quickly enlighten our understanding.

The four components of each Veda

SAMHITA – A collection of hymns and mantras of a certain Veda

BRAHMANAS – The second part of every Veda, brahmanas are the rules for pandits, priests with instructions for rites, sacrifices and yagya addressed to deities. They contain very interesting and inspiring stories, philosophical discussions and details about the yagyas.

ARANJAKAS – (comes from the word aranja – forest) forest debate. Aranjakas are the third part of every Veda. They contain esoteric, mystical knowledge, mostly based on the inner meaning and action of Vedic ceremonies.

UPANISHADS – Upanishad literally means “to sit at Master’s feet and listen to his words, learning.” The Upanishads are the philosophical and spiritual essence of the Vedas conveying the highest knowledge of God, the soul and the world, as well as the importance of ceremonies and sacrifices. They are mostly composed in the form of conversations between Teacher and students in the form of questions and answers.

The teachings of the Upanishads say that there is only one reality in the entire Universe, and that is God. Everything that exists in the Universe in the past, present, and future arises from God and disappears again in it, in the endless cycle of creation, maintenance, and destruction. He is the Sun, the Moon and the stars, the planets, every living being, every living and non-living matter and every virtue, every vice, all good and all bad, every thought, every feeling and every deed. He is space and time and everything that exists in the Universe. He is eternal in the Universe and transcends it at the same time. He is formless, eternal, boundless, and omnipotent. He is saguna (manifested) and nirguna (unmanifested). It is manifested in all creation and is unmanifested when all creation disappears in Him. The highest and purest principle of God is his unmanifested existence, when the whole Universe disappears in Him, when the Sun, the Moon, the stars, the planets, all living and non-living cease to exist, and space and time disappear.

This unmanifested being is the only existing reality. The Upanishads contain one of the highest ideas about God and his connection with people and the Universe. They are rightly given the highest place among the great philosophies of the world. Schopenhauer said: “No teaching in the world is as pleasant and sublime as the teaching of the Upanishads. They were my consolation in life and will be my consolation in death. “

Traditionally, there are 108 of the most famous, major Upanishads. Some of the most famous are Brihad-Aranjaka Upanishad, Chandogya-Upanishad, Taittririya-Upanishad, Kena-Upanishad, Iso-Upanishad, Mundaka-Upanishad, Svetasvatara-Upanishad and Mandukya-Upanishad. Each of these major Upanishads is related to one of the four Veda Samhitas. The idea of one unformed, infinite God, as the true reality of the Universe that is inseparable and at the same time otherworldly, is based on philosophical discussions from the Upanishads. The foundations of teaching about the immortal soul, the law of karma or the consequences of appropriate deeds, and the law of the evolution of living beings through the sequence of rebirth according to their karma or deeds are also in the Upanishads.

Yagja comes from the Sanskrit word jajna which means sacrifice, worship. Sacrifice and surrender through service, internal and external is one of the basic principles of Hinduism. One form of this principle is yagja. Yagja implies a ceremonial offering of fires of cereals, flowers, ghi – refined butter, milk, spices, wood… Yagja is performed by pandits who prepare the space, perform the sacrifice itself and chant mantras, ie Vedic hymns. In order to perform yagja correctly, it is necessary to perform it according to detailed and precise instructions from the Vedas, which the pandits learn from early childhood and dedicate their whole life to learning the Vedas and performing Vedic ceremonies. There are two basic types of yagja, the shrauta performed by the pandits and the grihya ceremony performed in his home by the man who is the head of the household, along with his wife. Shrauta are more elaborate and richer and more complicated, and its goals extend far beyond the well-being of a particular household. 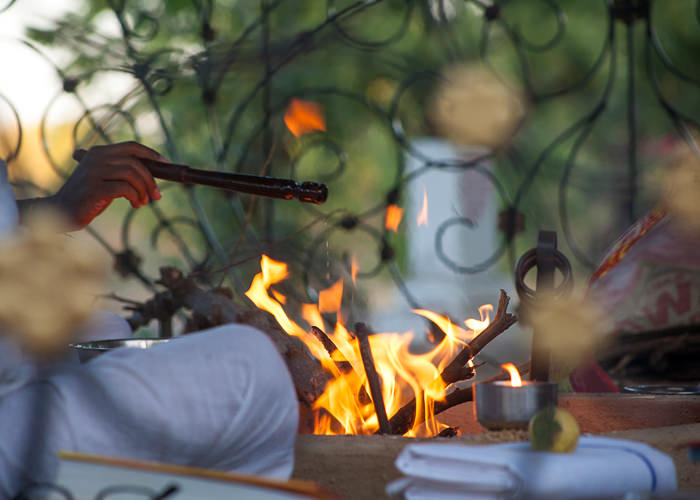 Shrauta yagja involves the participation of four pandits. They are known as hotr, adhvarju, udgatri and brahmin, each of whom performs a strictly defined part of the ceremony: one prepares the place of the ritual according to the instructions of the Vedic science of space, vastu-sastra, another sings mantras, a third performs the ritual itself, a fourth supervises the correctness of all this and corrects mistakes with special mantras. The performance of the yagja itself consists of four basic parts, which are present in each ceremony. In the first part, is created (drawn, built and richly decorated) ingle , which is also a mandala that does not contain life or pran-shakti at this stage. In the second part, this character is filled with life energy, so this level is called prana pratishta. The third part is called upaćar, and it is the part during which the summoned energy intensifies and increases. The fourth part is called parajan or forgiveness, the release of energy, whereby the yagja reaches its culmination.

More on the Vedas and the Upanishads

More about the Vedas and the Vedangas

The oldest spiritual scriptures of India and of the world are called the VEDAS. Veda literally means “knowledge”, specifically the highest knowledge about God and man. For Hindu people Vedas are the spiritual truth, said to have been a direct revelation from God (DEV VANI– the voice of God) to four ancient Rishis (self-realised saints)…